The building that now houses the hôtel Diderot goes back to the 15th century, and its history is entwined with that of the neighbouring Saint-Mexme collegiate church, as it probably housed one of its prelates.

Following a roof fire, the building was partly rebuild in the 18th century and varied modifications ensued, as the addition of a terraced balcony with an iron-wrought spiral staircase in the early 1900. 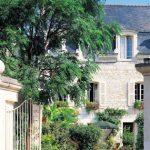 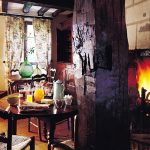 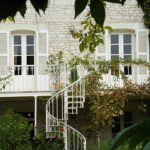 Before the hotel, a family of public servants – the Baillons – lived in the main building, and the right wing hosted the archives of the city of Chinon.

Roger Lainel, a former submarine officer turned hôtelier bought the buildings in the early ’60s to turn them into an hotel. With his second wife Moricette, he ran the place until 1979 when he sold it to Théodore and Françoise Kazamias. In 2003, three siblings – Laurent, Françoise et Martine Dutheil – took over the Diderot and passed it on, in 2015, to Jean-Pierre et Jamie Dagneaux.

Jam-making at the Diderot goes back to the origins of the hotel : Moricette Lainel prepared plain, traditional jams with the fruits of her garden. Angelica – as in, “Peach and angelica” – was her signature. Until 2016, she lived close to the hotel and brought us fruits from her garden, allways with angelica.

When she took over the hotel, Françoise Kazamias developed the jam-making operation and introduced new flavors and varieties inspired by her years in Africa. Thus came the apricots, bananas, and pelargonium scents. Theodoros, her Cyprus-born husband, suggested figs, anis, rose, orange blossom and bergamot.

During his 15 years at the Diderot, Laurent Dutheil introduced new varieties in the hotel’s jam repertoire, bringing the tally to more than 50.

When she arrived at the Diderot, Jamie Schler-Dagneaux, an accomplished baker and cook, had little choice but to maintain the tradition. She took over in February 2015, just in time to process the oranges from her native state, Florida, and adding her own personal touch to the flavors of the jams she creates.

Your arrival
Check-in from 3 pm to 9 pm.
Cancellation
Free of charge up to 2 days before arrival.
Buildings
The Diderot is not a recent, standardized hotel. Each room is different and there are 3 separate buildings : the House, the Pavilion and the Annex.
Parking
Gated parking closed from 9 pm to 7 am, 10 spots (8 €/night). No reservation. 370 free parking spaces within 100 meters from the hotel.
Pets
We love pets, but some of our clients don't. This is why they are forbidden in the hotel, on the grounds and in the cars parked inside.
Check-out
From 7 am to 11.30 am.